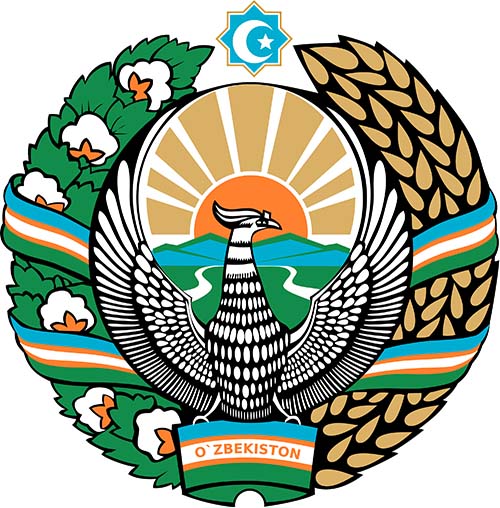 The state emblem of the Republic presents the image of the rising sun over a flourishing valley. Two rivers run through the valley, representing the Syrdarya and Amudarya. The emblem is bordered by wheat on the right side and branches of cotton with opened cotton bolls on the left side.

The eight-angle star is at the top of the emblem, symbolizing the unity and confirmation of the republic. The crescent and star inside the eight-pointed star are the sacred symbols of Islam. The mythical bird Semurg with outstretched wings is placed in the center of the emblem as the symbol of the national Renaissance. The entire composition aims to express to desire of the Uzbek people for peace, happiness and prosperity. At the bottom of the emblem inscribed the word “Uzbekistan” written in Uzbek on a ribbon in the national colors of the flag.